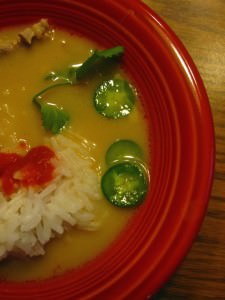 Thai Coconut Soup is another chicken broth based soup that I make a lot. I view it as a variation on the Tortilla Soup recipe I posted yesterday.
*I think this is a universal recipe; every culture has it. Yesterday we did the Mexican version, today we'll do the Thai version. We did the American version with our turkey noodle soup from a while back.

There's a lot of overlap on those lists, no? 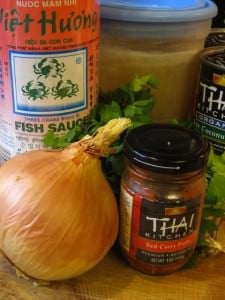 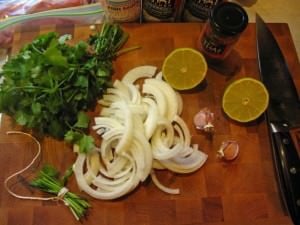 Directions:
1. Saute the aromatics: Heat the peanut oil in a dutch oven over medium-high heat until shimmering, then add the onion. Saute until just starting to brown, about 8 minutes. Make a hole in the center of the pan and add the cumin and garlic. Toast for 30 seconds to 1 minute, or until you start to smell garlic.

2. Simmer the broth: Add the chicken stock, coconut milk, and fish sauce to the pot. Tie the cilantro stems and lemongrass into a bundle, and put in the pot. Scrape the bottom of the pot to loosen up any browned bits of onion, then turn the heat to high. Bring the pot to a boil, and boil for 1 minute.  Reduce the heat and simmer for 10 minutes to allow the flavors to mingle.
*I keep my stock in the freezer, so I thaw it in the microwave while I'm doing step 1. If it's still frozen at this point, that's OK.  Just put the big ice cube of stock into the pot, and it will melt on its way to boiling. 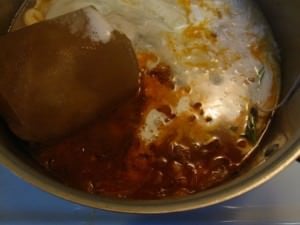 Note the big block of frozen chicken stock on the left...


4. Serve: I prefer to build the soup in individual serving bowls.  Put some rice and chicken in a bowl, and cover with the broth. Top with a little cilantro and some slices of hot pepper, and whatever optional garnishes you have. 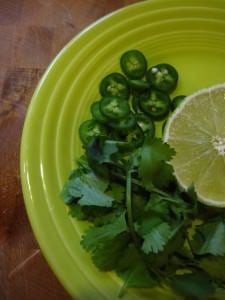 Variations:
*Want to cook this with fresh chicken? After simmering the broth, and before seasoning, add a pound of boneless, skinless chicken breasts cut into ¼" slices. They'll cook through in three to five minutes - simmer until they are just no longer pink.

*Pork is a good substitute for the chicken in this dish as well.  Either pork loin or tenderloin will work.

Notes:
*This is a hearty soup, so I usually serve it on its own.  If I'm really hungry, I make some stir fried vegetables as a side dish.

*I used to be able to find lemongrass at my local grocery stores, but they don't seem to carry it any more. I'll have to keep an eye out for it the next time I go to an asian market.

Questions?  Comments?  Other ideas?  Leave them in the comments section below.