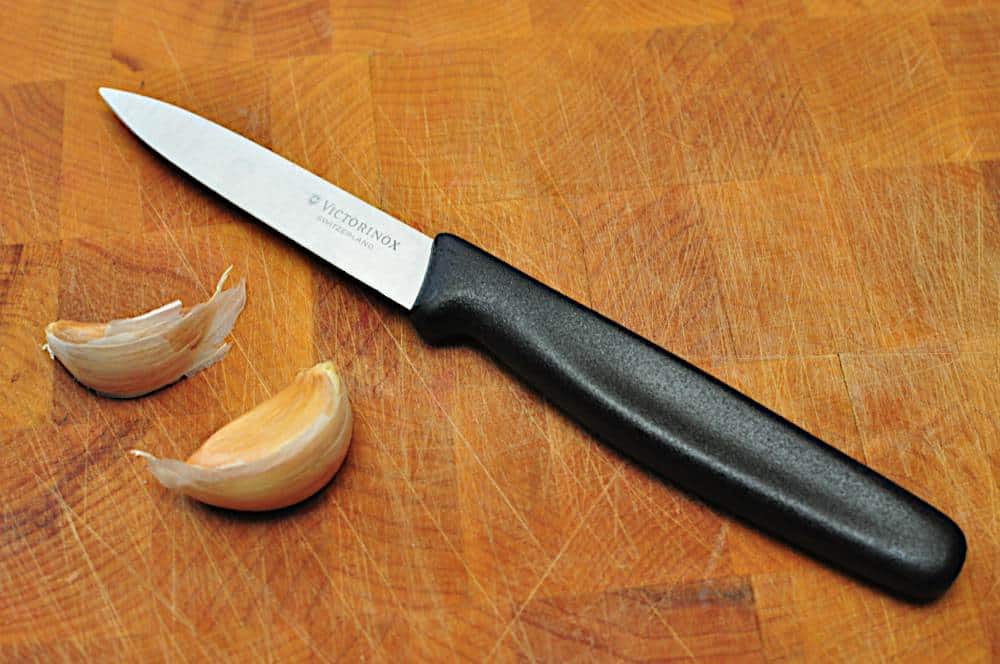 I have two workhorse knives in my kitchen. My chef's knife does eighty percent of the cutting work. The remaining twenty percent is done by my paring knife.
*Well, other than a "Less than 1%" category that falls to my bread knife and my boning knife. 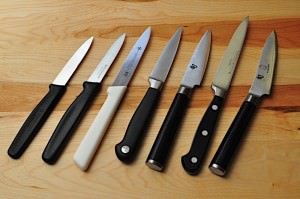 *Yes, I have a knife buying issue. I've kept a tight watch on my purchases, because my knife block is overflowing. Once I get a bigger block, watch out...

**Now, I would be curious to try out a Sheep's Foot paring knife

, as recommended by Kenji Alt.

Normally, I'm a fan of the "buy the best, and only cry once" approach. My chef's knife is embarassingly expensive, and I love it. But...well...see that array of paring knives up there? I laid them out from least to most expensive, left to right. Which one do you think I reach for every time?

, second from the left, is my favorite. It's sharp, light, and effortless to use.  With a chef's knife, I want some weight, some heft, so the knife does the work.  With a paring knife, that extra weight makes it feel heavy and slow.  The Victorinox feels light and swift in my hand.

I use it when I want a really fine mince. (Shallots, usually). I use it to trim meat, because it is so inexpensive I don't feel guilty throwing it in the dishwasher. It is my free-handed cutting utensil; when I need to core an apple, or trim the ends off an onion to throw in the stock pot, it leaps from the block into my hand.
*Yes, I know, shame on me for trimming an onion free-handed. Sometimes I don't feel like cleaning off the cutting board...

How much would you pay for such a versatile tool? Thirty dollars?  Forty?  Sixty? Here's the best part. It costs $5. That's right - five dollars. Can you pass up such a bargain? (Checks Amazon)...wait, what? They upped the price to eight dollars?

What a rip off! That's robbery! That's...well, that's still a great price for such a good knife. If you have space in your knife block, grab one of these today. As you can see in the picture, I have two. I would get depressed when I reached for it and it was in the dishwasher.

*All joking aside, Victorinox knives are a great deal.  If I was just starting out, outfitting my kitchen, the first two things I would buy are the Victorinox Chef's knife

and this paring knife.  Later on I would add their boning knife

.  That's all you really need.

*Beyond that...God help you if you become a knife addict like me.  But have you seen this knife? I'm in love.

Disclaimer: This month I'm writing about essential kitchen tools. As with all my "Things I Love" posts, I am not receiving anything from the manufacturer, and I bought all the items with my own money. I use these tools every day in the kitchen, and I would hate to live without them. I thought, with Christmas coming, you might need a few gift ideas for the cook in your life. And, as always, if you buy something through the Amazon.com links on my site I get a small commission from the purchase. Thank you!
(OK, I'm good with the FCC now.)