I've shared a bunch of smoothie recipes, but somehow I missed the one we make the most. We make it so often that I stock up on bags of frozen mixed berries when they're on sale at the grocery store. Smoothieless on Sunday? That would be a tragedy.

Saying this is a “recipe” is overstating things a bit - we make smoothies by emptying out the freezer and/or the pantry. An extra banana? Throw it in there. No apple juice? Substitute water, plus some honey or sugar. A half-full bag of frozen strawberries and a half-full bag of frozen peaches? Sure, that’s mixed berries. Into the blender they go. The kale is a recent addition, trying to sneak some healthy vegetables in for the kids. They were dubious at first - you want to add WHAT to the smoothie? - but now they're OK with it, as long as we don't add so much that the smoothie turns olive green.

When I say “we” make the smoothies, I mean the kids make the smoothies. They’ve even started to make them on weekdays, before heading off for school. Now if I could just convince them that saving a quarter inch of smoothie in the blender jar is not a good idea. They stash it in the refrigerator, forget about it, and I find it a few days later. 2And cleaning a blender is so easy. Fill it ⅓rd of the way with cold water, add a drop or two of dish soap, and run the blender on high for 30 seconds. Rinse out the soap, then fill halfway with fresh water, and run for another minute to finish rinsing. Put it upside down in the dish drain, and you’re done. But, when I ask the kids to do this, you’d think I asked them to clean the entire kitchen with a toothbrush. 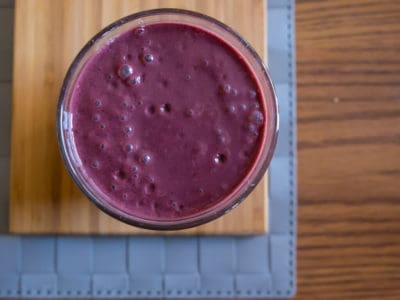