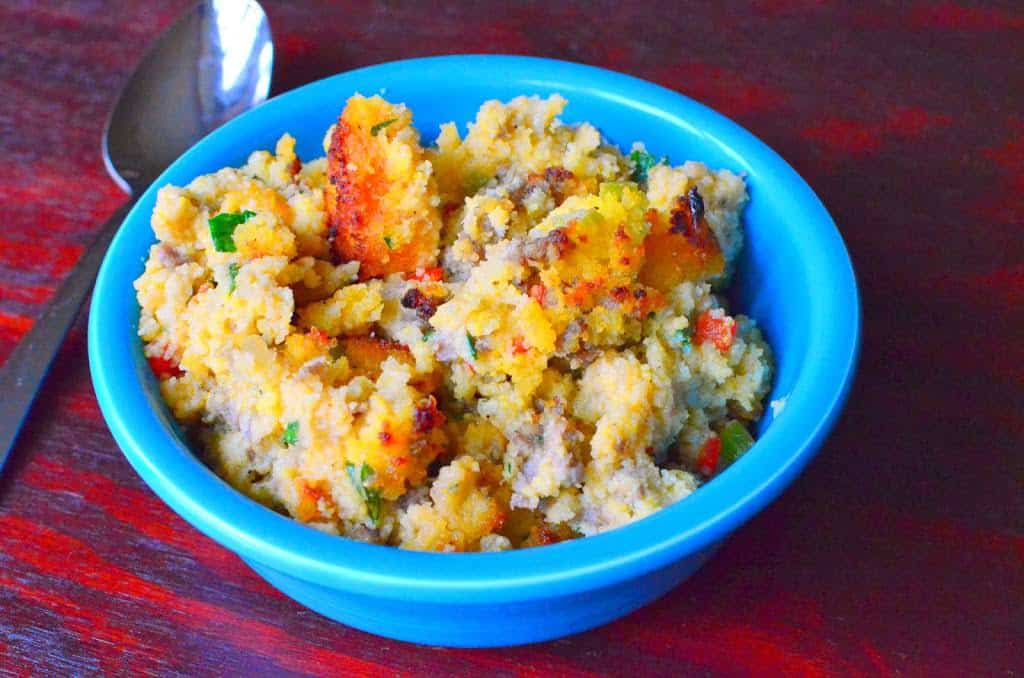 That stuffing looks good - but you HAVE to try cornbread stuffing.

A friend challenged me after I posted my Thanksgiving stuffing recipe. Cornbread stuffing? After some research, I found out it’s a Southern thing - usually called cornbread dressing, and loaded with sausage.1I'm a Yankee, of course - how else would I miss out on Conrbread Dressing?

That will work - cornbread and sausage sounds like a splendid combination. The recipes are similar to my usual stuffing recipes. Saute aromatics, toss with dried bread - cornbread - cubes, stir in beaten eggs as a binder, bake, and brown.

As a blogger, I have to cook two Thanksgiving dinners. One is on Thanksgiving; the other is a few weeks ahead of time, so I can test my recipes and post my pictures. This was the stuffing I served. I got a few funny looks when I put it on the table, but the proof was in the tasting, and it was a hit once everyone took a bite.
Except for my one son. He picked out chunks of sausage and brushed the cornbread off. Oh, well, can’t please everyone.

Melt the butter in a large frypan over medium-high heat. Add the onions, celery, and bell pepper, then sprinkle with 2 teaspoons of kosher salt. Saute until the onions are soft, about five minutes. 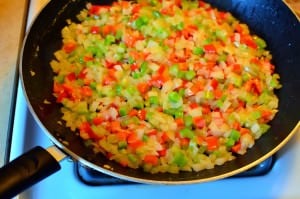 Add the sausage to the pan with the onions and cook, breaking the sausage into bite sized pieces. Cook until the sausage is no longer pink, about five minutes. Stir in the parsley, and remove from the heat. 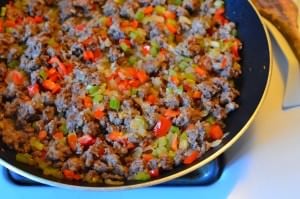 Put half the cornbread in a large mixing bowl. Scrape the onion and sausage mix from the frypan into the bowl, then stir until evenly mixed. Pour in half the chicken stock, add the pepper (and salt if using homemade stock), and stir until all the cornbread is damp. As you stir, the cornbread will compact itself; add the rest of the cornbread and stock in batches, stirring to pack it down. Stir in the beaten egg, then pour the stuffing into the foil pan. 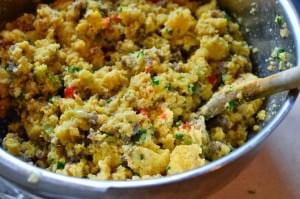 Oven Instructions:
Crimp a sheet of aluminum foil over the pan. Put the stuffing in a preheated 350°F oven. Cook with the foil covering the stuffing for 45 minutes. Remove the foil from the top of the pan and cook until the stuffing is browned and crispy on top and the stuffing is 150°F in the middle, about 15 more minutes. 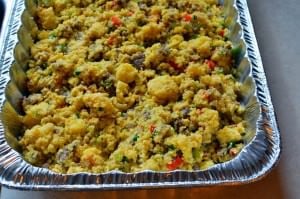 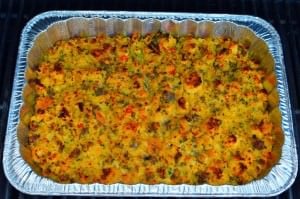 Questions? Other ideas? Native born Southerners who think I'm a clueless Yankee? Talk about it in the comments section below.

through the links on this site, or donate through my