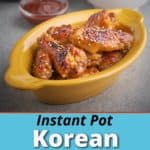 What do my kids want me to make for dinner? Pacific rim cuisine. Chinese stir fries, Japanese ramen, Thai curries...and anything with Korean gochujang sauce.

Long time readers know how much I love gochujang, the Korean hot pepper paste that reminds me of a thick, spicy ketchup. Apparently I passed that love on to my kids; we keep a bottle of Gochujang sauce in the fridge so they can add it to anything and everything. They’re not the only ones who love it - It used to be a specialty ingredient, only found in Asian markets; now my local grocery stores stock it in their international food aisles.

This recipe uses gochujang with my pressure cooker wings technique. The wings get cooked in my Instant Pot, tenderizing them and rendering a lot of the fat under the chicken skin. Then I toss the wings with the gochujang-based sauce, and run them under the broiler on a rimmed baking sheet to crisp up the skin and tighten the glaze. If you’re in a hurry, you can skip the broiling step, but browning the wings helps a lot with the flavor, and adding a bit of that crispy chicken wing texture. They’re not deep fried wings - obviously - but they’re still very good.