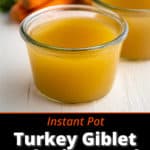 Instant Pot Turkey Giblet and Wing broth. How do I make turkey broth before Thanksgiving? I pressure cook the neck and giblets from my turkey, and add in some extra turkey wings.

I need lots of broth for Thanksgiving gravy and stuffing. Sure, I could make chicken broth, or wimp out and buy it at the store.1 On the one hand, using chicken feels like cheating. On the other hand…how do I get a batch of turkey broth without cooking a turkey first?

If I’m just making gravy, I use the neck and giblets - the parts stuffed into the cavity of the bird - so they don’t go to waste. But that’s not enough turkey parts to flavor a big batch of broth. The penny dropped when I saw the pack of turkey wings at my grocery store. Wings are cheap(ish), and mostly skin and bones, exactly what I need to bulk up the giblets and make a big pot of broth.

Instant Pot Turkey Giblet and Wing Broth. How do I make turkey broth before Thanksgiving? I pressure cook the neck and giblets from my turkey, and add in some extra turkey wings.