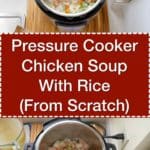 Instant Pot Chicken Soup With Rice (From Scratch) - Cooking once, cooking twice, cooking chicken soup with rice...in the pressure cooker, starting with nothing but bones and water.

Yes, I know I’ve made that joke before. I apologize. But I have to do it again. I have to!

Chicken Soup with Rice is comfort food for my wife. She listened to a lot of Carole King growing up, and when she’s fighting a cold, she wants a steaming bowl of this soup.

How to make chicken soup in the pressure cooker…from scratch

Chicken broth was my entry to pressure cooking - once I learned how good it was, and how quick it was to make, I could never go back to the boxes on the grocery store shelf. 3 pounds of bony chicken pieces - I use chicken backs, because my grocery store stocks them cheap - an onion, some (optional) carrot and celery, and a bay leaf. Cover with water, pressure cook for 60 minutes, strain, and you have a fantastic broth, one that is so much better than store-bought broth.

I show how to make the broth as part of the recipe, but I usually make the broth ahead of time. I make batches of pressure cooker broth all the time, and freeze them in 2 cup containers. (I use both pint canning jars and 2 cup storage containers.) When I need a quick weeknight soup, I skip the “make the broth step” by pulling jars of broth out of my freezer.

The only other trick to this recipe, if it is a trick, is cutting back on the rice. Rice absorbs an amazing amount of liquid; the first few times I made this recipe, I used 1 cup of rice to 8 cups of chicken broth…and while it looked OK coming out of the pressure cooker, by the time I served it was a rice stew, not a soup. I know that ½ cup of rice doesn’t look like much, but trust me on this one. (Unless you like rice stew. I’m not judging. Just…know what you’re getting into.)

Instant Pot Chicken Soup With Rice (From Scratch) - Cooking once, cooking twice, cooking chicken soup with rice...in the pressure cooker, starting with nothing but bones and water.

You can make the entire batch of broth ahead of time, which makes this a quick weeknight recipe. Finish step 1, then freeze all the broth in 2 cup containers. When you’re ready for soup, grab 8 cups of broth from the freezer, and continue with step 2.

½ cup of rice is not going to look like much…but it will expand a lot. Don’t add more, or you will wind up with more of a rice stew than a soup.

If you have leftovers from 2 roasted chickens, use the bones to make the broth, and about 2 cups of shredded chicken instead of the raw chicken breast.

Slotted Spoon and Fine Mesh Strainer for straining the broth. (And, a spare pot liner for your pressure cooker is the perfect place to strain the broth into.)

Enjoyed this post? Want to help out DadCooksDinner? Subscribe via eMail or RSS reader, recommend DadCooksDinner to your friends, and buy something from Amazon.com through the links on this site. Thank you!