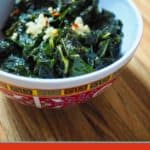 I was checking out our new Whole Foods 365 store, and saw bunches of kale on sale for 50 cents. Sale kale? Pressure cooker time!

I know, I know, “Whole Paycheck”…but I always like having another option for good ingredients. And, as I’ve said before, if you want good vegetables, go to a store that caters to vegetarians. (And, I was pleasantly surprised by how low the prices are. Not sure if it’s the Whole Foods 365 concept, or the Amazon.com influence, but the prices seemed reasonable.)

This is my pressure cooker kale basic technique by way of China. Or, at least Chinese-American. It is inspired by the plates of steamed Chinese vegetables I order at dim sum restaurants. (I need a little something green to counteract all the steamed dumplings and sticky buns.)

If there’s a trick to this recipe, it’s trimming the kale, and cutting out the thick inner stem. That prep work takes as long as the rest of the recipe. When I’m in a hurry - and the kale sale is over - I will cheat and buy bags of pre-washed, pre-trimmed kale. Hey, sometimes you just need an easy green side dish, you know?

Pressure Cooker Chinese Kale. A quick green side dish from the pressure cooker.

Don’t feel like trimming kale? Get a bag of pre-washed and trimmed kale. Look near the bagged salads. It won’t be as fresh as the bunches of kale...but sometimes perfect is the enemy of good enough.