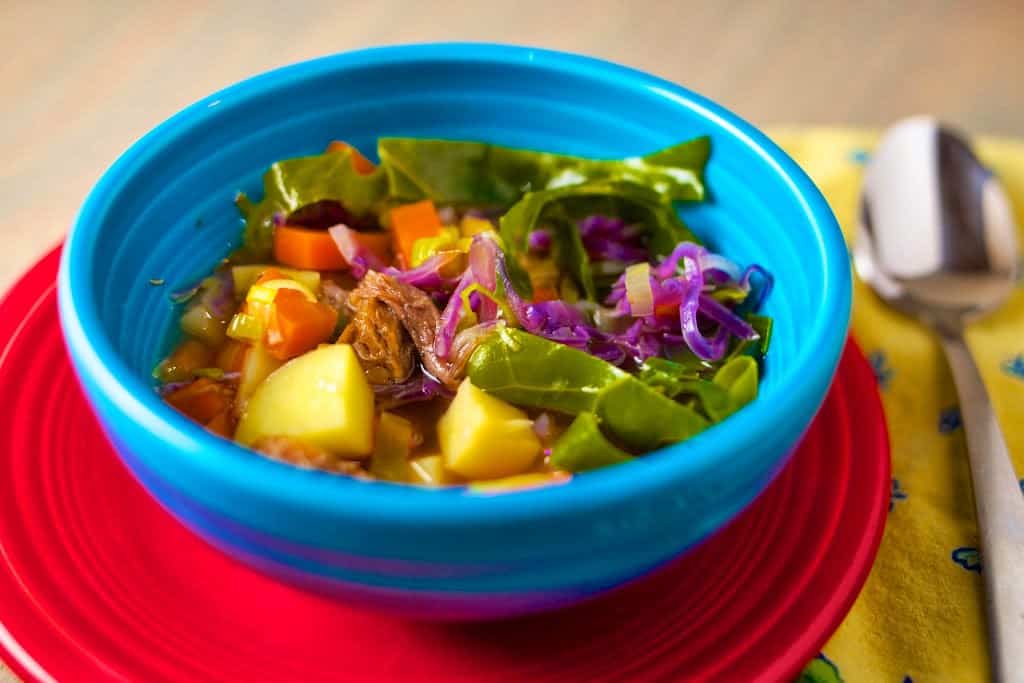 Oh no! I forgot the pig’s head!

My brother loves pig roasts. He bought a La Caja China Cuban pig roaster a few years ago, and now all he needs is an excuse to roast a pig. Family together at the cottage in the summer? Pig roast. Ohio State-Michigan game? Pig roast. Co-worker having a party? Matt shows up, roaster in tow.

I always grab some leftovers from Matt on my way out, so I can make shredded pork sandwiches. This time, when I was leaving, I remembered Judy Rodgers’ Zuni Cafe’s pig stock.
And her story about the burglar who snuck into the kitchen early one morning and stole the boiling hot head out of the stock pot. Talk about desperate…

Matt packed up the head for me…and I forgot it while wrangling the kids out the door. Matt threw the head in the freezer for me, and gave it to me as part of my Christmas presents.
A frozen pig’s head! Exactly what I wanted…

So it’s the week after Christmas, and I have a pig’s head and a pile of root vegetables left from my winter CSA share. Soup time!

If you can’t get a pig head, don’t worry – 5 pounds of meaty pork bones will work, and, frankly, won’t gross out your family. One glimpse of the pork jaw and my daughter shrieked and ran from the room.

Now, you don’t have to use pork stock – homemade chicken stock is an acceptable substitute. If you’re desperate, you can use store bought chicken broth, preferably low sodium broth in the aseptic packages – but please, at least once, try to make your own stock. With homemade stock, the broth is the highlight of the soup; with store bought broth, the soup is more about what you add into it.
…and that’s why this soup is OK with store bought – we’re adding in shredded pork, leftover from a roast. Leeks, kale, cabbage, potatoes, parsnips, and carrots. You can hide a bland stock behind all that.

Put all the pork stock ingredients in the pressure cooker pot, and add extra water if needed to just cover the pork. (Don’t go over the pressure cooker’s max fill line). Lock the lid, bring the pressure cooker up to high pressure, and cook for 1 hour at high pressure. Let the pressure come down naturally for 15 minutes, then quick release any remaining pressure. Remove as much of the solids from the pot as possible using a slotted spoon, then strain the stock through a fine mesh strainer. Let the strained stock settle, then spoon off the layer of fat on top. (Or degrease the fat in batches using a gravy separator. Even better, if you have the time: make the stock the night before, refrigerate it, and scrape off the solidified fat cap the next morning.) Use 2 quarts of stock for this recipe, and freeze the rest for a second batch of soup later.
This step can be done weeks in advance – freeze the pork stock in quart containers and thaw out before continuing. 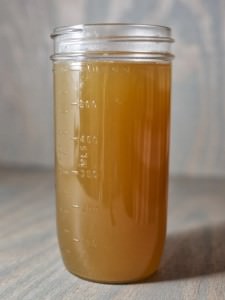 In a large (6 quart or larger) pot, heat the vegetable oil over medium heat until shimmering. Add the leek, sprinkle with 1/2 teaspoon kosher salt, and saute until the leek softens and starts to brown around the edges, about 5 minutes. 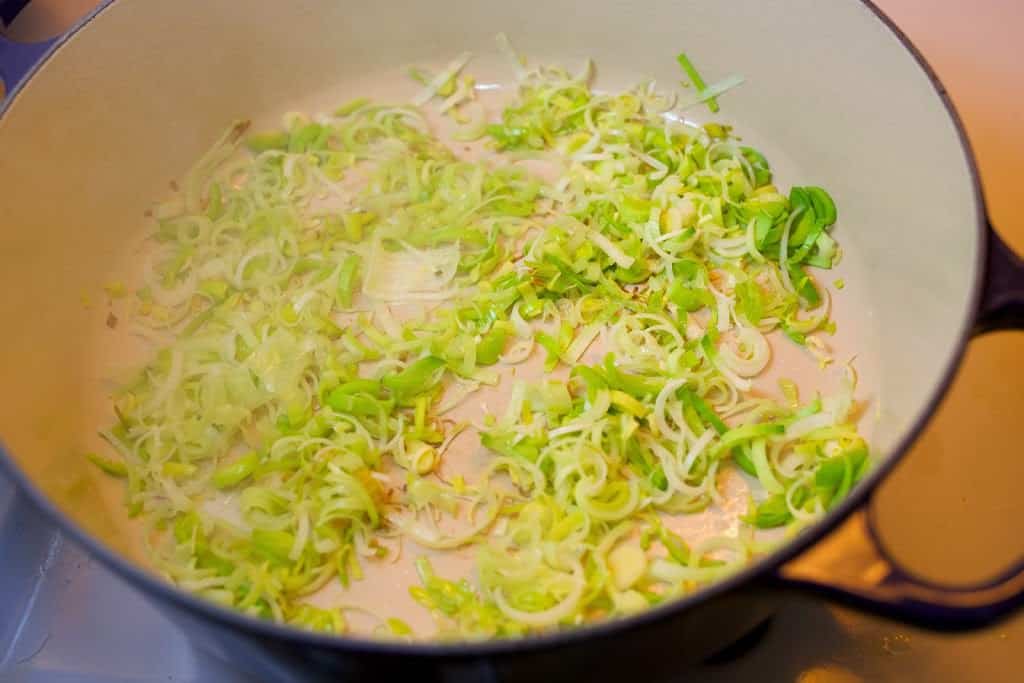 Add the stock to the pan, and scrape loose any browned leeks that are stuck to the pan. Add the shredded pork, carrot, parsnip, kale, cabbage, potatoes, and 1 teaspoon kosher salt. Cover the pot, increase the heat to high, and bring the pot to a boil. Remove the lid, reduce the heat to a simmer, and simmer for ten minutes, until the vegetables are softened. Stir in the vinegar, then add salt, pepper, and more vinegar to taste. 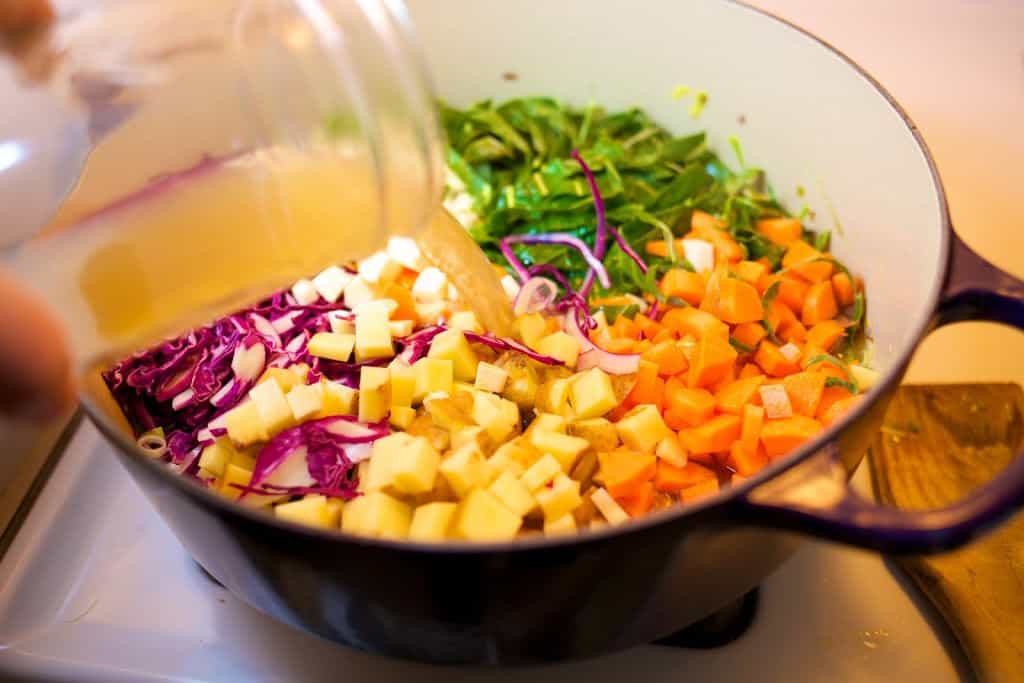 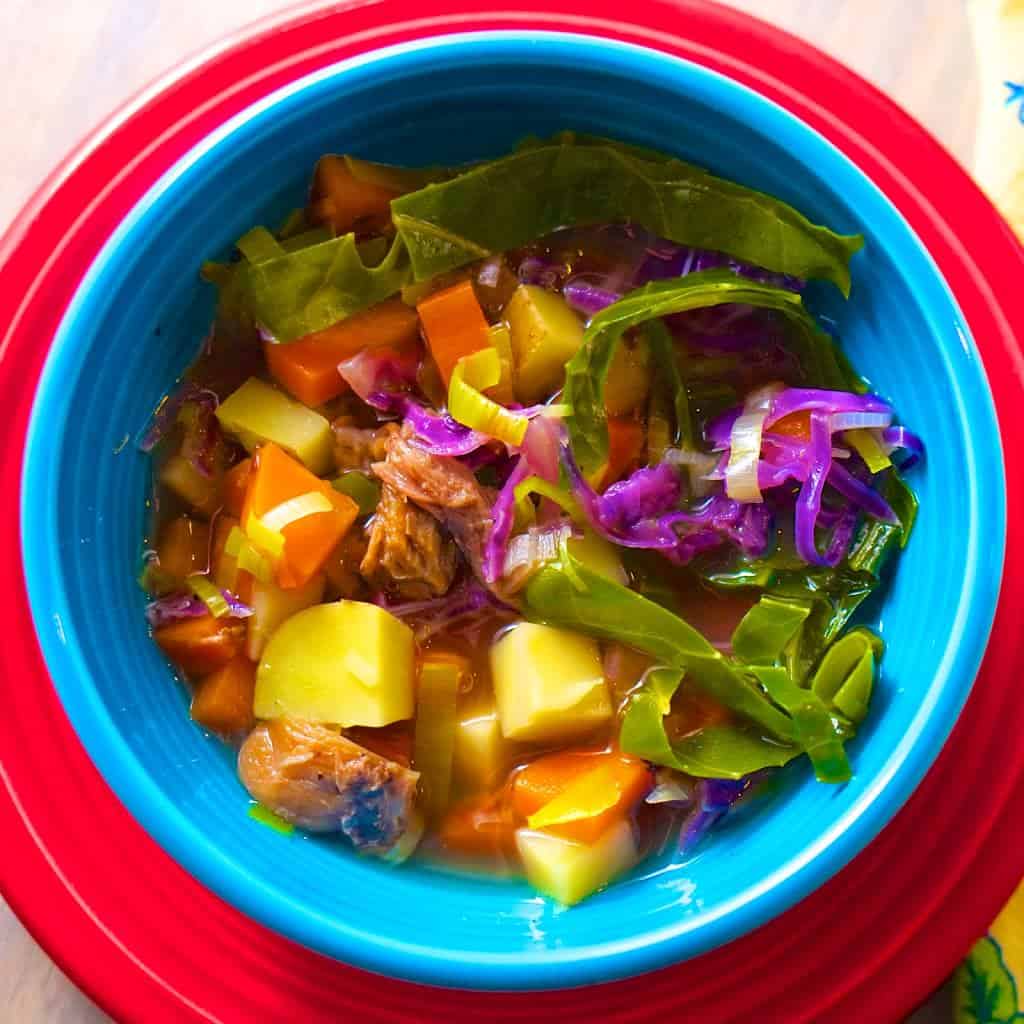 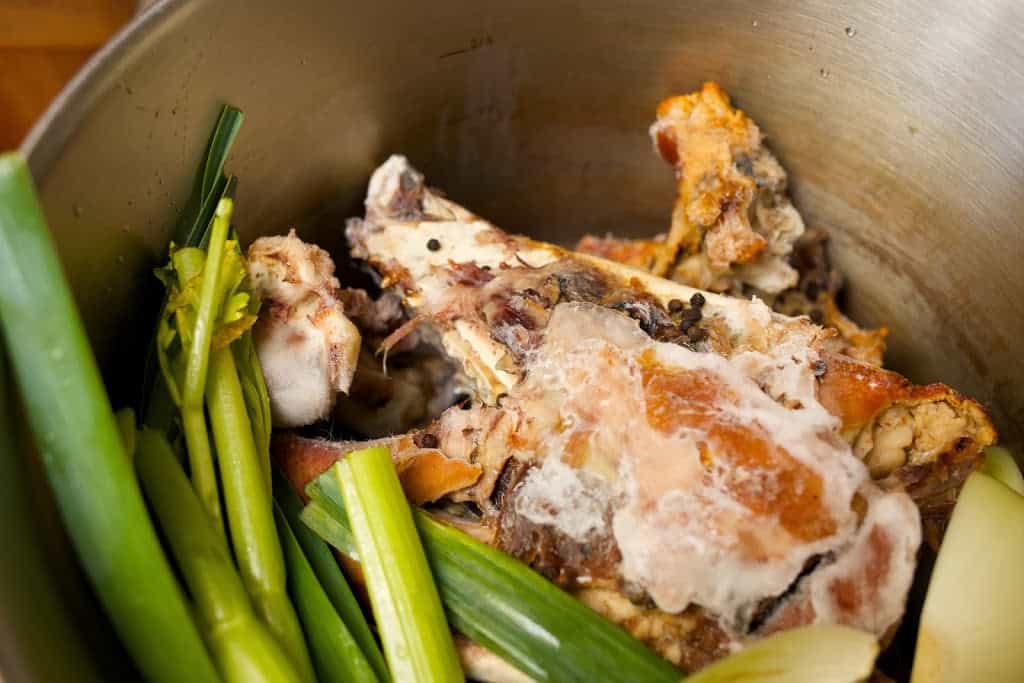 Here are some more ideas to use up the extra stock. Substitute the word “pork” for “turkey”:
Pressure Cooker Turkey Noodle Soup with Vegetables
Turkey Soup with Chickpeas and Vegetables
Turkey Ramen Soup
Click here for my other pressure cooker recipes.