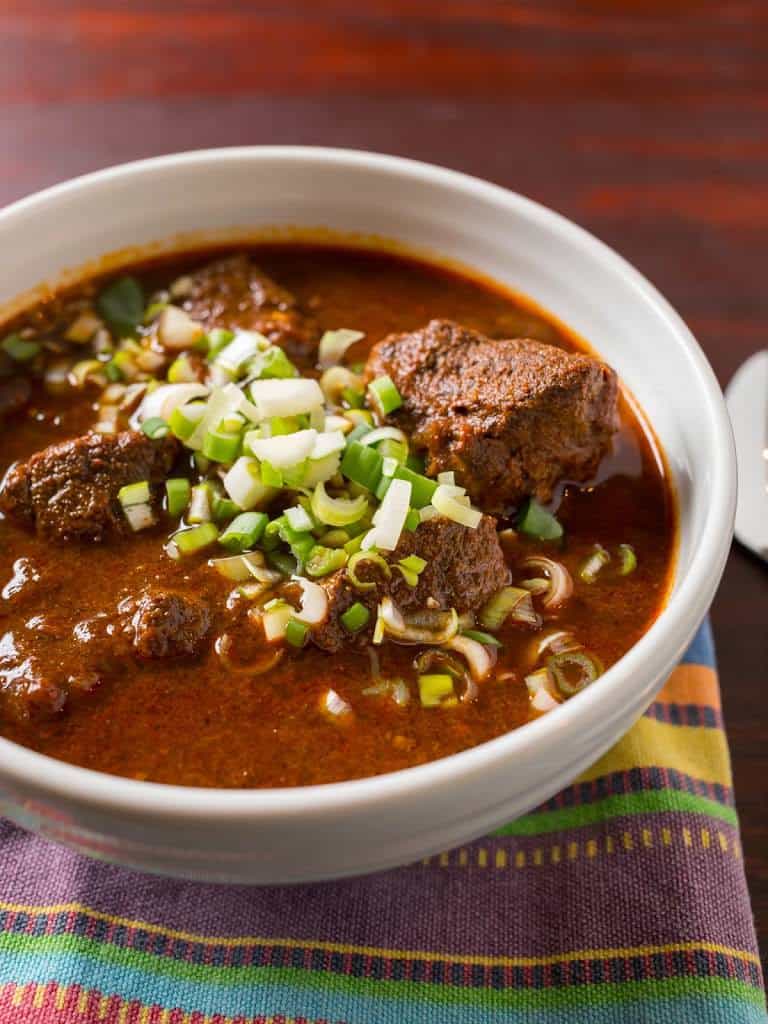 Getting ready for the Super Bowl? Here’s a pot of Texas Red to serve with the big game.

Now, I’m getting lazy in my old age; I would rather pressure cook chili for 30 minutes than simmer it for 4 hours. I know this will get me in trouble with the Texas chili purists, because chili should ALWAYS be cooked in a cast iron dutch oven hung over a post oak fire. Me? I want to free up time so I can…watch the endless pre-game show. 2I can’t wait for four hours of DeflateGate coverage.

Laziness aside, I do have a good argument for the pressure cooker; it helps me make chili the day before I want to eat it. This is a great chili hot out of the pot, but chili is always better the next day; that overnight rest and reheating does something good.“It lets the flavors marry”, is the traditional explanation. (I have no idea what that actually means, but it describes the results perfectly.) If you have the time – and the pressure cooker buys me the time – make this chili a day ahead. Your patience will be rewarded.
No pressure cooker? No worries. See “related recipes”, at the bottom of the recipe for stove top and slow cooker versions of this recipe.

Newfangled Pressure Cookers aside, this is a pretty straightforward chili recipe. I do use two additional tricks:

Trick 1: only brown the beef on one side. This trick I learned from Kenji Alt – I get browned fond on the bottom of the pot, and a sear on the beef, both of which add depth of flavor. By not browning the beef on all sides, I get more tender chunks of beef when the cooking is done, and the browning step goes much quicker. (Again with quicker. Maybe I’m not getting lazy in my old age; maybe I’m getting impatient? But I digress.)

Trick 2: the thickening. The sealed pressure cooker environment is good for trapping flavor and cooking quickly, but it doesn’t allow any evaporation. That means the liquid in the pot tends towards soupy instead of a thick chili. I do two things to fight this. The first is I cut back on added liquids – my favorite cooker, the Instant Pot, has a 1 1/2 cup minimum liquid amount, so I use a cup of liquid (coffee or beer), plus a can of crushed tomatoes to get above the minimum liquid amount. The next trick is to thicken after cooking. I whisk a quarter cup of masa harina – Mexican corn tortilla flour – into some of the cooking liquid, then stir the masa slurry back into the pot, and let it simmer for a few more minutes to thicken up.

Looking for a pressure cooker Texas chili? You’ve come to the right place. Even if I’m not from Texas.