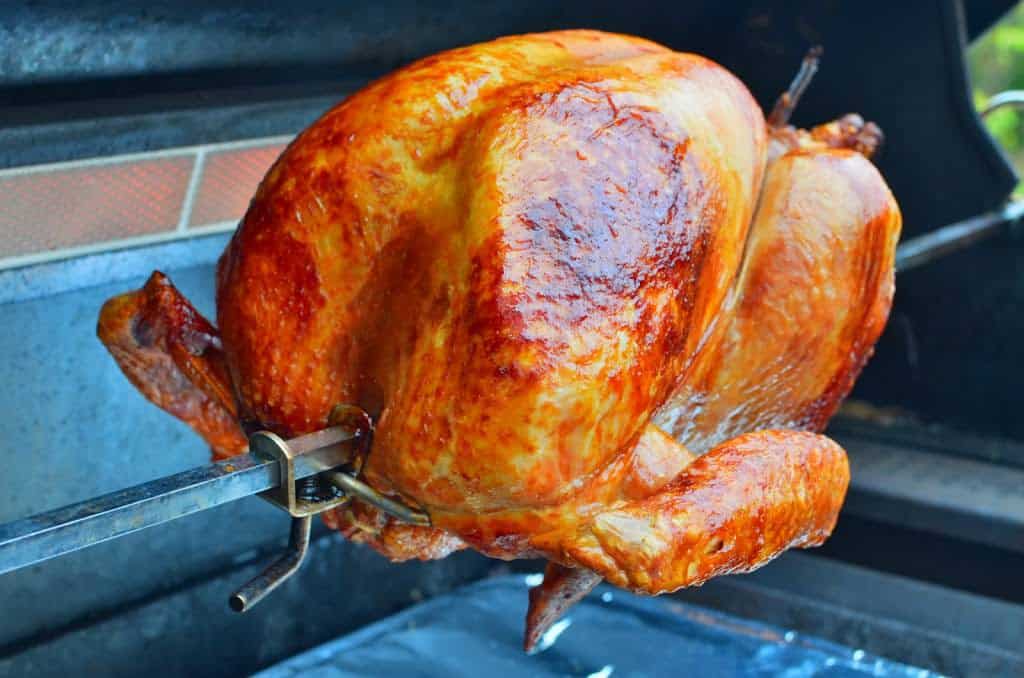 I hate needles. I was one of those kids who had to be held down to get my vaccinations.

But, years ago, I saw John Madden with a deep fried Cajun turkey during the Thanksgiving day football game. It looked amazing. I had to try it! All the Cajun turkey recipes recommended injecting a marinade, so I dutifully bought an injector kit. I got streaks of marinade and Cajun spices, surrounded by dry, unseasoned meat. I quit injection marinades and deep fried turkey the moment I tried a brined, grilled turkey.

After that, I moved from wet brines to dry brines. I prefer the taste to wet brining, and it’s a lot simpler – no heavy pot full of turkey and brine that I have to find space for in the refrigerator.

This year, I’m going back…to the future. Modernist Cuisine at Home convinced me to dust off my injector kit, mix up a wet brine, and injection brine my turkey.

The downside? I still hate needles. I get a little squeamish every time I open the injection kit – these are some serious looking needles. 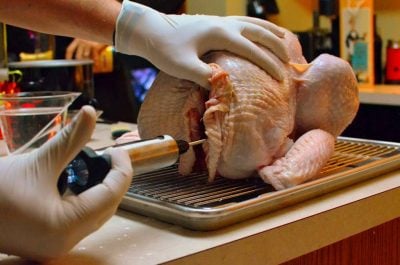 Injecting the brine into the turkey

How does injected turkey taste? I’m torn. I love my dry brined turkey, but it does give the turkey a bit of a cured meat flavor. (I think that’s why I like it.) The injection brine is more neutral, and has the advantage of adding moisture to the turkey breast, giving it an extra cushion before the white meat hits that “dry as dust” stage. Not a huge cushion, mind you – get it out of the grill as close to 160°F as you possibly can – but I don’t mind the extra moisture, and my wife (who prefers white meat) said this may be my best turkey ever.
This is why turkey processors enhance so many of their birds – juicy breast meat. Watch out for the words “enhanced with a x% solution” on the turkey’s wrapper. Enhanced means the turkey is pre-brined at the processing plant. You’re paying for extra water, and you risk over salting if you brine it yourself. Try to find a “natural” turkey – that is, just turkey, no added water or brine.

I’m borrowing another trick from Modernist Cuisine, and brushing the skin with a soy sauce and paprika glaze. This will season the skin (which we’re avoiding with the injection brine), while the protein in the soy sauce helps the skin to brown.

So, what am I going to do on Thanksgiving? Dry brine or injection brine? I will do both – two twelve pound turkeys, one dry brined, one injection brined. I have quite a crowd to feed this year, and I’d rather cook two smaller turkeys than one big bird.

Injection brine the turkey: Stir the brine ingredients in a measuring cup until the salt and sugar dissolve. Inject the brine into the turkey, pushing the needle all the way in, then slowly pulling the needle out while depressing the plunger to inject the brine. Try to inject brine into the meat about every inch to inch and a half. First do the breast: working from the front of the bird through the neck cavity, make three to four evenly spaced injections on each side. Next, do the wings – inject a little brine into the knob of the drumette (where the wing meets the breast), and between the two bones in the wing, going in the long way if you can. Move to the back of the bird and inject the thighs through the back cavity – each thigh should take two or three injections. Finally, inject the drumsticks with two injections, one in the knob of meat above the bone, one in the knob of meat below the bone. Mix the soy sauce and paprika, then brush the whole bird with the soy sauce baste. Set the bird on a rack over a roasting pan and refrigerate for at least 8 hours.

Truss and spit the turkey: Two hours before cooking, remove the turkey from the refrigerator. Truss the turkey, following the instructions in my How to Truss and Spit a Turkey post. Skewer the turkey on the rotisserie spit, securing it with the spit forks. Fill a gallon zip-top bag with ice, and lay the bag on top of the turkey’s breast to keep the breast colder than the drumsticks.

Set up the grill for Indirect Medium heat (325°F): Set the grill for indirect medium heat (325°F to 350°F) with the drip pan in the middle of the grill. Set up all the heat in the grill on one side, facing the turkey legs. With a charcoal grill, light a charcoal chimney 3/4 full of charcoal, and wait until it is covered with gray ash. Make a U of charcoal, with the pan in the middle, and the breast facing the open part of the U. With a gas grill, if possible, turn on two burners on one side of the grill instead of one burner on each side. (If you have an infrared rotisserie burner, leave it off at first. Check the turkey after 2 hours of cooking; if the turkey needs last minute browning, turn the infrared burner on high for the last half hour of cooking.)

Rotisserie grill the turkey: Put the spit on the grill, start the motor spinning, and make sure the drip pan is centered beneath the turkey. Close the lid and cook until the turkey reaches 155°F in the thickest part of the breast, about 2 1/2 hours for a 12 pound bird. If you are cooking on a charcoal grill, add 24 coals to the fire every hour to keep the heat going.

Serve: Remove the turkey from the rotisserie spit and remove the twine trussing the turkey. Be very careful – the spit and forks are blazing hot. Let the turkey rest for 15 to 30 minutes, then carve and serve. 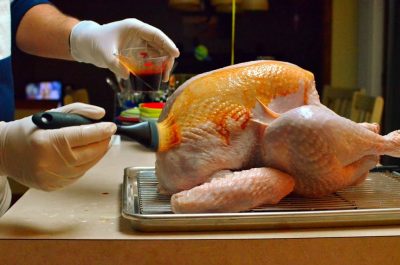 Basting the turkey with the soy sauce baste 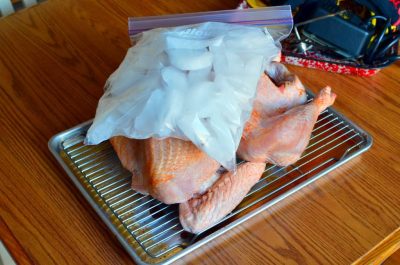 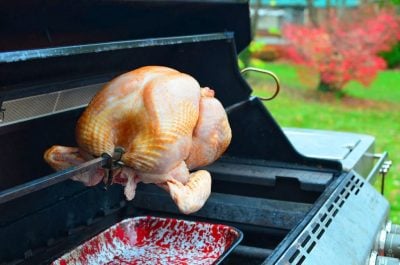 Turkey on the spit, spit on the grill, drip pan underneath

Turkey is ready to serve

It’s a Kindle e-book, so you can download it and start reading immediately!