A good friend of ours took a big leap. Last month, she sold her rural house (with a two acre lot), and moved to an apartment in downtown Cleveland (with one bedroom).3Hi, Rhonda! To celebrate, we went out for dinner and a glass of bubbly (or two). Adega’s modern Mediterranean cuisine was fantastic - I got to try Iberico pork - but the hit of the evening was a side dish, Crispy Brussels.

One bite of the roasted brussels sprouts, with bacon and honey, made Diane grab my arm and push a fork at me. “Can you make this? You have to make this.” she demanded.4Of course, sweetie. Now put down the fork. Please?

It’s not an exact duplicate of Adega’s Crispy Brussels. I’m taking their flavors and adapting them to my shaved brussels sprouts recipe. If you’re looking for a Brussels sprouts to convert Brussels haters, this is the recipe to start with. Bacon, honey…and a few Brussels sprouts shreds hidden in there. They’ll never know what hit them. 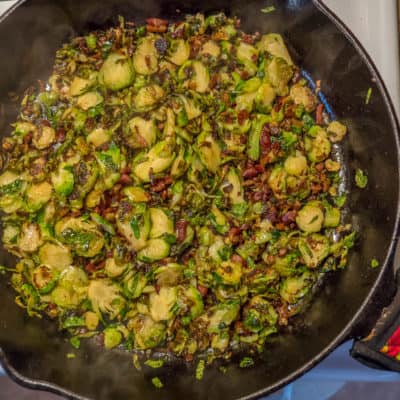