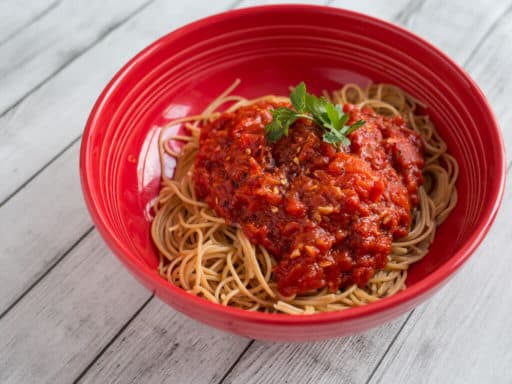 I’ve been on a quest for a long, slow-simmered tomato sauce. A lot of people swear by Marcella Hazan’s simple recipe – simmer butter, tomatoes, and a halved onion for an hour. It’s a good sauce. It’s fine. It’s not what I’m looking for. I also make a quick, weeknight tomato sauce. It’s better than jarred pasta sauce, and finishes in the time it takes to boil the pasta. That’s not what I’m looking for either. I want a classic Italian-American sauce, a slow roasted tomato sauce that cooks all day. 4There used to be an Italian-American restaurant in downtown Cleveland; their claim to fame was a pot of sauce that had been simmering since the early 1900’s. It was refreshed ever night, but the base of the sauce had been there forever. That’s the ideal version of the sauce I’m looking for.

I think my quest is over. 5My quest is never over. I’m always tinkering with recipes, but this one is good enough for me to use as the base from now on. My next test? Add a halved onion and some butter, to see if I can cross Marcella’s recipe with Frankies’. I stumbled across this sauce recipe from The Frankies Spuntino Kitchen Companion and Cooking Manual. It is barely a recipe – lightly toast garlic cloves in olive oil, add a big pinch of red pepper flakes, a lot of canned San Marzano tomatoes, and simmer for four hours. 6And yes, it’s Frankies, not Frankie’s. The Brooklyn restaurant has two chefs – Frank Falcinelli and Frank Castronovo.

I made a couple of modifications to their technique, because I can’t help myself:

This is a great recipe for a lazy Sunday. Get the pot in the oven early, let it cook all day (and fill the house with delicious tomato sauce aroma), and serve it on pasta for an amazing Sunday supper.

Slowly roasted tomato sauce. Canned plum tomatoes, roasted for hours in the oven until they become a caramelized sauce.

Adapted From: The Frankies Spuntino Kitchen Companion and Cooking Manual 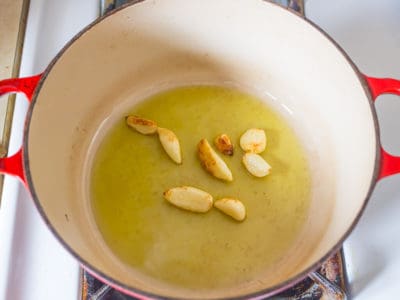 Garlic’s a little TOO brown – get the tomatoes in there! 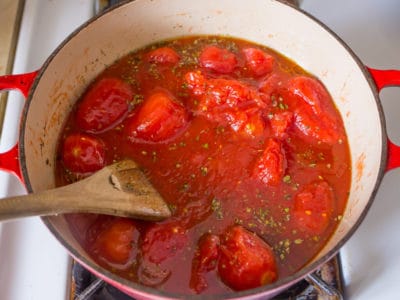 Breaking up the tomatoes 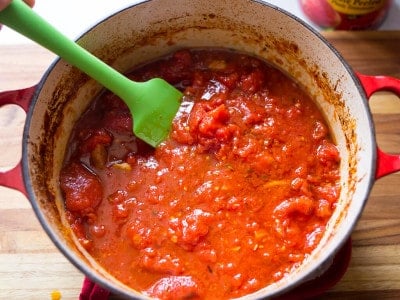 After 2 hours – tomatoes crumbling on their own 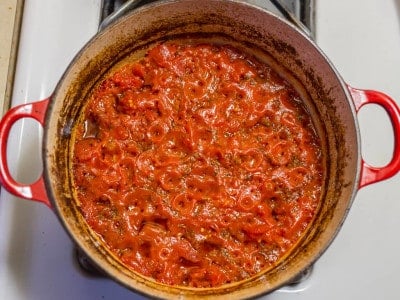