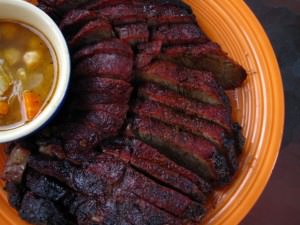 Enough teasing.  Here is my favorite sentence in the instructions of a recipe:

With the precision of a steady-handed circus performer, carefully remove the pan of soup from the bottom of the grill. [Rick Bayless's Mexican Kitchen

That sentence has everything - specific instructions, a colorful allegory that explains things better than a picture could, a grill - it's a thing of beauty.
*My second favorite sentence comes from Seven Fires: Grilling the Argentine Way

I must confess, after a lifetime of following fancy French recipes, that it gives me great pleasure to write the following list of ingredients:

This soup is a great idea for a side dish when you're cooking on the rotisserie; you're going to have fat and meat juices dripping into the pan anyhow, why not make use of them?  And the soup is delicious.  I was going to recommend using homemade stock instead of water, but you don't need it.  The dripping juices from the meat give you more than enough flavor. 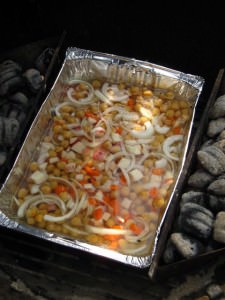 Directions:
1. Prepare the soup: Combine all the soup ingredients in your pan, except for the water, and toss with the salt.  Let sit at room temperature while you prepare the grill.

3. Cook the soup: Cook your main recipe, with the soup simmering underneath it. You want to cook the soup for at least 1 hour, and preferably 2 hours. Check the soup every half hour or so, and add more water if it is needed. The amount of evaporation will depend on the heat you're cooking at. With the barbacoa recipe, there isn't much evaporation, because we're cooking at a low temperature.

4. Remove from the grill: After the main rotisserie recipe has been removed, it's time to get the soup. To quote the master again:

With the precision of a steady-handed circus performer, carefully remove the pan of soup from the bottom of the grill. [Rick Bayless's Mexican Kitchen

I remove the pan of soup directly onto a sheet pan that I have ready.
*The more you walk around with a foil pan full of boiling liquid, the more likely you are to scald yourself when the foil collapses.  The sheet pan supports the foil pan, so you don't have to worry about it. 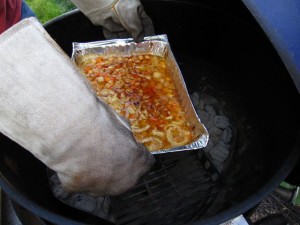 5. Skim the fat and serve: Skim any fat you can from the top of the soup.*  Taste for seasoning, and add more salt (probably another teaspoon, at least) and pepper to taste.  Transfer to a large serving dish, or into individual bowls.  Serve the soup as a first course, or as part of the main course with some of the rotisserie dish cubed and added to the soup.

*Skimming the fat works best if you put a corner of the sheet pan supporting your soup slightly higher than the others (say, on an oven mitt), and let the fat settle to the opposite corner. 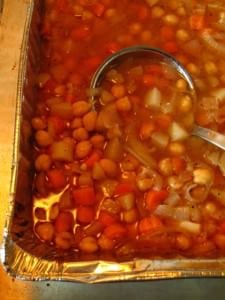 Variations:
*Rotisserie Pot Roast Soup: Basically, change the flavor profile by skipping the Mexican pieces.  Cook a rotisserie chuck roast with just salt and pepper as seasoning. For the soup, replace the can of garbanzo beans with a drained can of diced tomatoes. Serve by cubing the chuck roast and adding it to the soup.

*As I mentioned in the opening, this doesn't have to go with rotisserie chuck roast; any rotisserie roast will work with this idea.  Here are a few suggestions.

Notes:
*Traditionally, this is served as a first course, before the roast.  Serve with condiments to add to the soup. Good choices would be salsa, some sprigs of cilantro, grated Queso Anjejo, and hot sauce (especially a Chipotle Hot Sauce

*This soup tends to be a bit fatty, due to the drippings from whatever is being rotisserie roasted above it. Don't forget the degreasing step!

*I know, I'm getting repetitive.  I don't care.  Be careful when removing the soup from the grill!  If you have oven mitts or grill gloves, wear them.*
*And don't wear open toed shoes. Or flip flops, like I was doing while those pictures were being taken. I'm just lucky I have the precision of a steady handed circus performer.

Questions? Comments? Other ideas?  Other favorite recipe instructions?  Leave them in the comments section below.