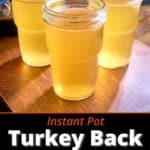 Instant Pot Turkey Back Broth. A big batch of pressure cooker broth for Thanksgiving, made with a pack of turkey backs.

I need a lot of broth for Thanksgiving. It’s a key ingredient in my gravy and stuffing recipes, so I like to make a big batch before the big day. The problem is finding the bony castoffs that make the best broth. I usually wind up making chicken broth, because I can get cheap packs of frozen chicken backs from my local grocery store.

So, imagine my delight when cryovac packs of frozen turkey backs showed up next to the chicken backs. They are exactly what I need to make Thanksgiving turkey broth ahead of time.

Turkey backs: My local grocery store carries frozen turkey backs in the meat department. If you can’t find backs, you can substitute turkey wings. Drumsticks have too much meat and not enough bone, so they aren’t an ideal substitute, but they’ll work in a pinch. If you’re stuck, you can use chicken backs, which are easier to find…but that’s a different recipe.

Onion, Celery, Carrot: I like a mix of all three vegetables in my broth, but when my pantry is running low, I’ll skip the carrot and/or celery. I like the sweetness that an onion adds to the broth, but if I’m out, I’ll substitute two cloves of unpeeled garlic.

Fresh thyme: Substitute 2 bay leaves, or ½ teaspoon of dried thyme, or skip it.

Instant Pot Turkey Back Broth. A big batch of pressure cooker broth for Thanksgiving, made with a pack of turkey backs.

Broth will last in the refrigerator for a couple of days. I freeze any broth I’m not going to use immediately in 2-cup containers. It will keep in the freezer for up to 6 months.