This post started as the last question in yesterday’s Thanksgiving Q&A, but I got on a roll…and it wound up being too long to fit. And…as always, I apologize in advance.

Thanksgiving is as much about logistics as it is about cooking.

The menu is large, and the crowd is larger. Suddenly, the oven isn’t large enough, the stove doesn’t have enough burners, and there isn’t enough time to get everything done. (Even when I use my grills as second and third ovens.)

Thanksgiving dinner for a crowd depends on planning, making things ahead, and not losing your head when chaos is swirling around you.

So…how does a typical Thanksgiving look when I’m hosting the big dinner?

Thanksgiving: Strategy vs. Tactics (vs. The Fog of War)

Or, what happens when a plan meets the enemy – and the enemy is us.

With apologies to Alton Brown. Romancing the Bird (A Good Eats Thanksgiving) inspired me and this post – but I didn’t realize that until after I finished writing.

At least, that’s how it works when everything goes right. (Yes, this is things going right.) When they go wrong, they really go wrong:

So…yikes. I got a little carried away there. To be clear – I’m not calling out members of my family. This is a work of fiction, recreated from years of Thanksgivings. The characters are products of my imagination, and any resemblance to actual persons is purely coincidental. Except for Uncle Rick. He knows who he is…

My Perfect Thanksgiving Menu (from the blog) 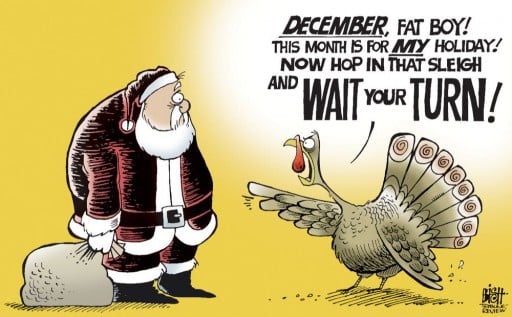 More important that great recipes and detailed planning? The real key is a sense of humor. When everything is going wrong, I get tunnel vision. I focus too much on the thing that is falling apart in front of me, and not on the big picture. I have to remind myself to relax, take a (mental) step back, and take a deep breath. “Smile and wave, boys, smile and wave.” I’m doing all this work because I love my family, and I look forward to bringing them together every year. Sure, there are hiccups – there always are – but they’re part of the process. Enjoy it, even when things are falling apart. Especially when things are falling apart – those are the stories the family will still be telling years later. And making memories for my family is really what Thanksgiving is all about.

Have a happy Thanksgiving, everyone!

Questions? Other ideas? Guesses who Uncle Rick is? Leave them in the comments section below.