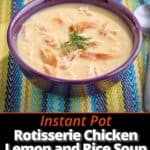 It’s time to make one of my Greek restaurant favorites, avgolemono soup. (In Greece, this is pronounced Av-o-le-mow-no, with a silent G. In America, we use the G - Av-go-le-mow-no). It’s a rice soup with chicken broth, with a bright lemon flavor, with a thick, creamy texture from the rice starch and eggs mixed in at the last minute.

This recipe is inspired by this one from Michael Symon: Avgolemono Recipe.

(If you're looking for a non-soup rice and chicken dish, check out my Instant Pot Chicken and Rice.)

See the recipe card for details

What kind of rice should I use in Avgolemono?

I use starchy short-grain rice like I would in risotto. Arborio is the most common in my local grocery stores. Carnaroli, Vialone Nano, sushi rice, or other short-grain white rice varieties will also work. You can use long-grain or medium-grain rice in this recipe, but it won’t come out quite as thick.

What if I don’t have a Rotisserie Chicken?

To make this recipe vegetarian: Use vegetable broth (like my Pressure Cooker Vegetable Broth) and skip the chicken breasts. Skip the egg, double the corn starch, and whisk the corn starch and lemon juice to make a slurry before slowly whisking it into the soup.

Avgolemono is a very lemon-forward soup. (it’s right there in the name, “lemono”.) But my kids preferred it with less (or no) lemon. And, chicken and rice soup is great, even without the lemon, so I can’t fault them. (I still prefer the lots of lemon version myself.)

Why use cornstarch in this soup?

To give the soup the ultra-thick mouthfeel it has at local Greek restaurants. The natural starch in the short-grain rice, and the egg, thicken this soup. . It is optional, though. Or, if you have it, you can substitute rice starch for cornstarch.

Do I have to make homemade chicken broth?

You really should try pressure cooking your own chicken broth, at least once, and you’ll see why I insist on it. It’s easy to make in an Instant Pot and freezes well. It’s one of the secret ingredients that make restaurant food taste so good. Homemade broth was one of the things that converted me to pressure cooking; once I tried a soup made with homemade chicken broth, I couldn’t go back.

If homemade broth is a bridge too far, go ahead and buy 64 ounces of store-bought broth. If you use store-bought broth, unless it is salt-free, skip the teaspoon of fine sea salt I add to the pot with the broth.

This recipe can be doubled in an 8-quart pressure cooker. If you want to halve the recipe for a 3-quart pressure cooker, you can, but you’ll have to find half a rotisserie chicken. (Or chop a whole rotisserie chicken in half and save the other half for another recipe.) The cooking time does not change; it takes the same amount of time to make the broth and cook the rice.

You can make the broth ahead of time - refrigerate it and the shredded chicken breasts until you are ready to make the soup. It will last for a couple of days in the refrigerator, or for up to 6 months in the freezer, separated into 2-cup storage containers.

This soup can be made ahead, but the egg may separate when reheating. I store leftover soup in 2-cup containers and refrigerate it for a couple of days, or freeze it for up to 6 months.

What to Serve with Instant Pot Chicken Lemon and Rice Soup

Soup and salad may be a cliché, but it’s a cliché I can get behind. I lean into the Greek aspect of this soup and serve it with a Greek Salad and pita bread. It’s also a good match for Eastern Mediterranean dishes, like Pressure Cooker Hummus or Grilled Beef Kabobs.